If you've ever wondered why English has such odd grammar rules, here's an excerpt from the book 'English Grammar for Dummies':

The next time you try to decide whether you had run or had ran home, thank the Angles and the Saxons. Those old guys were members of Germanic tribes who invaded England about 1500 years ago. Their languages blended into Anglo-Saxon, which came to be called Englisc. Nowadays it's called "Old English."

Old English lasted about 400 years; this English would look and sound like a foreign language to English-speakers today. Although it's gone, Old English isn't forgotten. Remnants remain in modern speech. You can thank (or blame) the Anglo-Saxons for most of the irregular verbs, including the fact that you say ran instead of runned.

In the Middle English period (1100 to about 1450) England was speckled with local dialects, each with its own vocabulary and sentence structure. Nobody studied grammar in school, and nobody worried about what was correct or incorrect. (There were a few more important items on the agenda, including starvation and the bubonic plague.)

In the fifteenth century the printing press was invented and the era of Modern English began. At this time, folks were more interested in learning to read and also more interested in writing for publication. But writers faced a new problem. Sending one's words to a different part of the country might mean sending them off to someone whose vocabulary or sentence structure was different. Not to mention the fact that spelling was all over the place!

Suddenly, rules seemed like a good idea. London was the center of government and economic life — and also the center of printing. So what the London printers decided was right soon became right. However, not until the eighteenth century did the rules realty become set Printers, in charge of turning handwriting into type, were guided by "printers' bibles," also known as the rules.

Schoolmasters tried to whip the English language into shape by writing the rules down. But they grafted Latin concepts onto English, and it wasn't always a good fit. In fact, some of the loonier rules of English grammar come from this mismatch. In Latin, for example, you can't split an infinitive because an infinitive is a single word. In English, infinitives are formed with two words (to plus a verb, as in to dance, to dream). Nevertheless, the rule was handed down: no split infinitives.

Learn the types of fruit

Here is an activity to learn different types of fruit.

I've tried to put it together so it would appeal to both young learners and adult beginners.

This week, I reposted the module on the present perfect tense with a new look, in line with the other materials on the site. This should als... 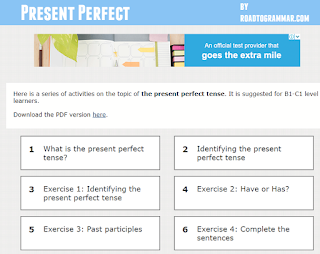