Here's a quiz that will come in handy for advanced level ESL students or ESL students struggling to read novels because they don't understand the specific action verbs:

Just a quick note to say what's coming up on Road to Grammar.

1 An interactive exercise on specific action verbs (like 'shrug', 'stagger' or 'twitch')

2 A selection of Android Apps featuring some of the games and activities on Road to Grammar
at September 05, 2010 No comments:

A new activity is available on RoadToGrammar.com

This idiom quiz lets you practice 150 commonly used idioms. The questions come up at random and you get a running total of your score.

What is an idiom?

Into it, over it, with it, done with it

It’s not the long words in English that are confusing, it’s the short ones:

Jack: What kind of stuff are you into?

(If you’re into it, it means you enjoy it as a kind of hobby.)

Jack: Are you still upset about me breaking your mug?

(If you’re over it, it means you have stopped being upset about it. Sometimes we say, ‘gotten over it’)

Jack: Fred told me he didn’t know what an MP3 was!

Jill: He’s not really with it, is he?

(If you’re not with it, it means you are not very clever or up-to-date. This phrase is most often used in the negative.)

Jack: Can I borrow your iPad?

Jill: Sure. I’m done with it for today.

(If you’re done with it, it means you are finished with it. We sometimes say, ‘through with it’ as an alternative.)

Suppose and Supposed to

Here's an odd phrase: 'supposed to'
Have you ever wondered what it means?
When we use the word 'suppose', it means 'think':
I suppose so = I think so (but I'm not sure)
However, when we use it in the phrase 'supposed to', the meaning changes and, in fact, there is more than one meaning.
1 A rule which is often broken
Example: We are not supposed to bring our cellphones to class.
This means the rule is often broken - student often disregard the rule and bring their cellphones to class
2 Reputation
Example: He is supposed to be the best runner on the team.
People say that he is the best runner on the team
3 A rule, commitment or appointment that has been broken
Example: He is supposed to be here. Where is he? (He didn't show up)
at March 07, 2010 No comments:

One of my students asked which is correct: pronunciation or pronounciation?

The answer is 'pronunciation'. And it is pronounced the way it is spelled.

Halloween is coming up and I vant to drink your blood! Err, I mean I want to share some Halloween vocabulary. Click on the link or the pictu... 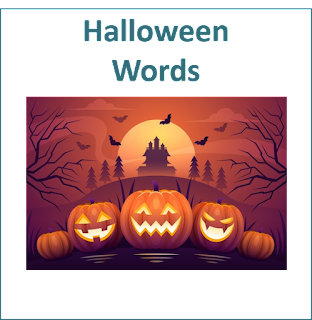